I’ve been very physical my whole life. I went out hiking and camping for days in the Australian forest, and when I trained at drama school for three years, we did a whole lot on stage-fighting techniques. And I was a dancer from 5 to 18, so I have a memory for choreography.
Yvonne Strahovski
Camping Drama Life Memory School Years
Sarah is very strong. She’s really intelligent and she’s very physically capable. I like to put that into my own life as well.
Yvonne Strahovski
Life
I have a strong dance background. I danced from age five till 18, and that helps a lot. Doing a fight routine is like doing a dance routine.
Yvonne Strahovski
Age Dance Fight Routine
I loved school, I loved putting on my uniform and doing homework every day. I was one of those good students that the teachers liked. I guess that’s got to be a pretty nerdy, geeky part of me.
Yvonne Strahovski
Day Pretty School Students Teachers
I know that one of the distinguishing things was I looked like I could hold a gun, even though I’d never held one before and I’m physically able to do the martial arts and all that stuff.
Yvonne Strahovski
I love watching a good, freaky horror movie. I love it. It’s one of my favorite things to do, to go and see at the cinema. Just to tune out and be freaked out.
Yvonne Strahovski
Cinema Favorite Horror Love
I’m pretty gross. When I talk I can be gross and crude.
Yvonne Strahovski
Pretty Talk
I’ve always been a very outdoors sort of girl. I’m more a tomboy than a girly girl.
Yvonne Strahovski 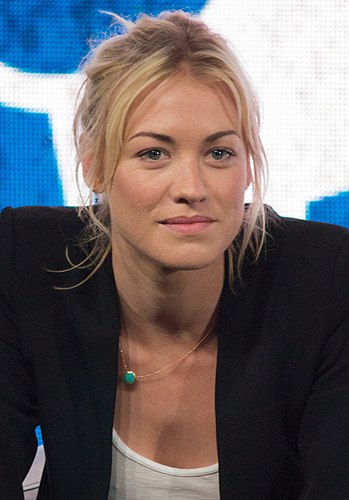 Yvonne Jaqueline Strzechowski, known professionally as Yvonne Strahovski (born 30 July 1982), is an Australian actress. She is best known for her roles as CIA Agent Sarah Walker in the NBC spy drama series Chuck (2007–2012), Hannah McKay in the Showtime drama series Dexter (2012–2013), and CIA Agent Kate Morgan in the Fox event series 24: Live Another Day (2014). She currently stars as Serena Joy Waterford in the Hulu drama series The Handmaid's Tale (2017–present), for which she received a Primetime Emmy Award nomination.

Strahovski's other notable works include Lego: The Adventures of Clutch Powers (2010), Killer Elite (2011), I, Frankenstein (2014), The Astronaut Wives Club (2015), Manhattan Night (2016), and The Predator (2018). She has also voiced Miranda Lawson in the Mass Effect video game series and Batwoman in the animated superhero film Batman: Bad Blood (2016).