We’ve had a long wrangle with the pharmaceutical industry about parallel imports, and what we were saying is we want to make medicines and drugs as affordable as a possible to what is largely a poor population.
Thabo Mbeki
Drugs Poor Population Saying Want
One of the things that became clear, and which was actually rather disturbing, was the fact that there was a view which was being expressed by people whose scientific credentials you can’t question.
Thabo Mbeki
Being Fact People Question
It wouldn’t sit easily on one’s conscience that you had been warned and there could be danger, but nevertheless you went ahead and said let’s dispense these drugs.
Thabo Mbeki
Conscience Danger Drugs
As a consequence of the victories we have registered during our first ten years of freedom, we have laid a firm foundation for the new advances we must and will make during the next decade.
Thabo Mbeki
First Freedom Will Years
The poor prey on one another because their lives offer no hope and communicate the tragic message to these human beings that they have no possibility to attain a decent standard of living.
Thabo Mbeki
Hope Living Poor Possibility
South Africa was to evolve into the most pernicious example of the criminal practise of colonial and white minority domination.
Thabo Mbeki
Example Minority
A matter that seems to be very clear in terms of the alternative view, is what do you expect to happen in Africa with regard to immune systems, where people are poor, subject to repeat infections and all of that. Surely you would expect their immune systems to collapse.
Thabo Mbeki
People Poor
We will continue to count on your unwavering support and commitment to working with leaders of our continent in bringing about the desired renaissance of Africa.
Thabo Mbeki
Commitment Leaders Support Will
That surely must be a concern to anyone who decides this drug must be given to stop transmissions, again from mother to child, which is extremely costly and must be taken into account.
Thabo Mbeki
Concern Mother
I don’t imagine Heads of Government would ever be able to say I’m not an economist therefore I can’t take decisions on matters of the economy; I’m not a soldier I can’t take decisions on matters of defence; I’m not an educationist so I can’t take decisions about education.
Thabo Mbeki
Decisions Economy Education Government
We are not being arrogant or complacent when we are said that our country, as a united nation, has never in its entire history, enjoyed such a confluence of encouraging possibilities.
Thabo Mbeki
Being Country Encouraging History Nation Possibilities United
I get a sense that we’ve all been educated into one school of thought. I’m not surprised at all to find among the overwhelming majority of scientists, are people who would hold one particular view because that’s all they’re exposed to.
Thabo Mbeki
Majority People School Scientists Sense Thought
When will the day come that our dignity will be fully restored, when the purpose of our lives will no longer be merely to survive until the sun rises tomorrow!
Thabo Mbeki
Day Dignity Purpose Sun Will
Together we have travelled a long road to be where we are today. This has been a road of struggle against colonial and apartheid oppression.
Thabo Mbeki
Oppression Road Struggle Today
The concern around probable questions, which in a sense have been hidden, will grow around the world and the matter is critical, the reason we are doing all this is so we can respond correctly to what is reported to be a major catastrophe on the African continent.
Thabo Mbeki
African Concern Questions Reason Sense Will World
Well, because lots of questions had been raised about the toxicity of the drug, which is very serious.
Thabo Mbeki
Questions
It’s very worrying at this time in the world that any point of view should be prohibited, that’s banned, there are heretics that should be burned at the stake.
Thabo Mbeki
Time World
South Africa belongs to all who live in it, black and white.
Thabo Mbeki
If we only said safe sex, use a condom, we won’t stop the spread of AIDS in this country.
Thabo Mbeki
Country Sex
I say that why don’t we bring all points of view. Sit around a table and discuss this evidence, and produce evidence as it may be, and let’s see what the outcome is, which is why we are having this International panel which we are all talking about.
Thabo Mbeki
May Talking
If you sit in a position where decisions that you take would have a serious effect on people, you can’t ignore a lot of experience around the world which says this drug has these negative effects.
Thabo Mbeki
Decisions Effect Experience Negative People World
Many of our own people here in this country do not ask about computers, telephones and television sets. They ask – when will we get a road to our village.
Thabo Mbeki
Computers Country People Road Television Will
Those who oppressed us described us as the Dark Continent!
Thabo Mbeki 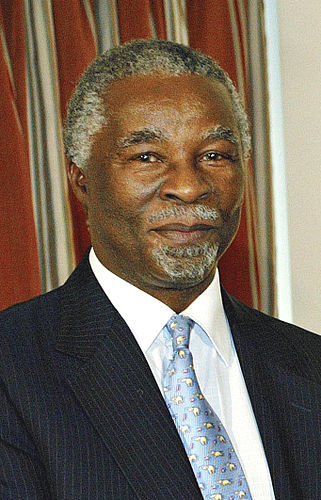 (Xhosa pronunciation: [tʰaɓɔ mbɛːkʼi]; born 18 June 1942) is a South African politician who served as the second post-Apartheid President of South Africa from 14 June 1999 to 24 September 2008. On 20 September 2008, with about nine months left in his second term, Mbeki announced his resignation after being recalled by the National Executive Committee of the ANC, following a conclusion by judge C. R. Nicholson of improper interference in the National Prosecuting Authority (NPA), including the prosecution of Jacob Zuma for corruption. On 12 January 2009, the Supreme Court of Appeal unanimously overturned judge Nicholson's judgment but the resignation stood.

During his tenure in office, the South African economy grew at an average rate of 4.5% per year, creating employment in the middle sectors of the economy. The Black middle-class was significantly expanded with the implementation of Black Economic Empowerment (BEE). This growth exacerbated the demand for trained professionals strained by emigration due to violent crime, but failed to address unemployment amongst the unskilled bulk of the population. He attracted the bulk of Africa's Foreign Direct Investment (FDI) and made South Africa the focal point of African growth. He was the architect of NEPAD whose aim is to develop an integrated socio-economic development framework for Africa. He also oversaw the successful building of economic bridges to BRIC (Brazil, Russia, India and China) nations with the eventual formation of the India-Brazil-South Africa (IBSA) Dialogue Forum to "further political consultation and co-ordination as well as strengthening sectoral co-operation, and economic relations".Mbeki mediated in issues on the African continent including: Burundi, the Democratic Republic of Congo (DRC), Ivory Coast, and some important peace agreements. Mbeki oversaw the transition from the Organisation of African Unity (OAU) to the African Union (AU). His "quiet diplomacy" in Zimbabwe, however, is blamed for protracting the survival of Robert Mugabe's regime at the cost of thousands of lives and intense economic pressure on Zimbabwe's neighbours. He became a vocal leader of the Non-Aligned Movement in the United Nations, and, while leveraging South Africa's seat on the Security Council, he agitated for reform of that body.Mbeki has received worldwide criticism for his stance on AIDS. He questions the link between HIV and AIDS, and believes that the correlation between poverty and the AIDS rate in Africa was a challenge to the viral theory of AIDS. His fate was not helped by Health Minister Manto Tshabalala-Msimang and the overhaul of the pharmaceutical industry in South Africa. His ban of antiretroviral drugs in public hospitals is estimated to be responsible for the premature deaths of between 330,000 and 365,000 people. Mbeki has also been criticised for responding to negative comments made about his government by accusing critics of racism.