It will be great when it’s not such a big deal when a woman gets a good job.
Susan Sarandon
Job Will Woman
You guys ask really long questions. In the U.S., they just want to know who you’re sleeping with.
Susan Sarandon
Questions Want
I think I’m an actor because I have very strong imagination and empathy. I never studied acting, but those two qualities are exactly the qualities that make for an activist.
Susan Sarandon
Acting Actor Empathy Imagination
I’m a native New Yorker. Everything to do with New York feels like my family.
Susan Sarandon
Family
The only time I’ve really been away from my kids to do work was doing Shall We Dance because they both were in camp and it was the first time in twenty years that I haven’t been with my kids.
Susan Sarandon
Dance First Kids Time Work Years
When I tell people I’m a comedian they say, ‘Oh, are you funny?’ I say, ‘No, it’s not that kind of comedy.’
Susan Sarandon
Comedy Funny People
I look forward to being older, when what you look like becomes less and less an issue and what you are is the point.
Susan Sarandon
Being
I try to live my life every day in the present, and try not to turn a blind eye to injustice and need.
Susan Sarandon
Blind Day Eye Injustice Life Present
Children reinvent your world for you.
Susan Sarandon
Children World
I’m tired of being labelled anti-American because I ask questions.
Susan Sarandon
Being Questions
Before our kids start coming home from Iraq in body bags and women and children start dying in Baghdad, I need to know, what did Iraq do to us?
Susan Sarandon
Body Children Dying Home Iraq Kids Women
In the U.S., they just want to know who you’re sleeping with.
Susan Sarandon
Want
Making love is like hitting a baseball. You just gotta relax and concentrate.
Susan Sarandon
Baseball Love Relax
I was told I had an overabundance of original sin.
Susan Sarandon
Sin
We stand a chance of getting a president who has probably killed more people before he gets into office than any president in the history of the United States.
Susan Sarandon
Chance History Office People President states United
The only thing I can talk about is just forgiving yourself, because I do not have everything together. And so I tell people: No, you should see my house, it’s a mess.
Susan Sarandon
Talk
Everyone has a responsibility towards this larger family of man, but especially if you’re privileged, that increases your responsibility.
Susan Sarandon
Family Man Responsibility
I think sometimes what happens is that all of this feeling out of control manifests itself in trying to control your body; whether it’s an eating disorder or talking about getting your nose fixed, as if that’s going to be the solution to all the pressure.
Susan Sarandon
Body Control Disorder Eating Feeling Pressure Solution Talking Trying
So I would hope they would develop some kind of habit that involves understanding that their life is so full they can afford to give in all kinds of ways to other people. I consider that to be baseline spirituality.
Susan Sarandon
Habit Hope Life People Spirituality Understanding
If you walk down the street and see someone in a box, you have a choice. That person is either the other and you’re fearful of them, or that person is an extension of your family. And that makes you at home in that world and not fearful. So really it’s very self-serving.
Susan Sarandon
Choice Family Home Self World
Just because I haven’t yet had any project surgery, I’m not going to knock it, because I think women have the right to do whatever they want to their bodies that make them feel good about themselves.
Susan Sarandon
Project Right Want Women
It is a different world than when I was growing up, and you started to just kind of maintain at thirty-five and just hope you can hope it together. People are a lot more vital than I am and doing all kinds of things and leading really important movements.
Susan Sarandon
Growing up Hope Leading People World
To know that once you decide to look at life outside of the narrow limits of just your world and start to understand that you can make a difference in very simple ways – in volunteering and all the way up to bigger world problems.
Susan Sarandon
Difference Life Limits Problems World
When you start to develop your powers of empathy and imagination, the whole world opens up to you.
Susan Sarandon
Empathy Imagination World
It’s still not easy to find roles that offer more complex images of women.
Susan Sarandon
Women
Now, Tim has been really, really busy, and it’s been my job now to kind of deal with everything. And trying to figure out how we balance that, logistically it’s a nightmare. But these little jobs make it much easier.
Susan Sarandon
Balance Job Jobs Now Trying
Do you really have to be the ice queen intellectual or the slut whore? Isn’t there some way to be both?
Susan Sarandon
Queen
I feel my family’s needs are a priority. I’m not comfortable with the idea of serving the many and ignoring my family.
Susan Sarandon
Family Idea Needs 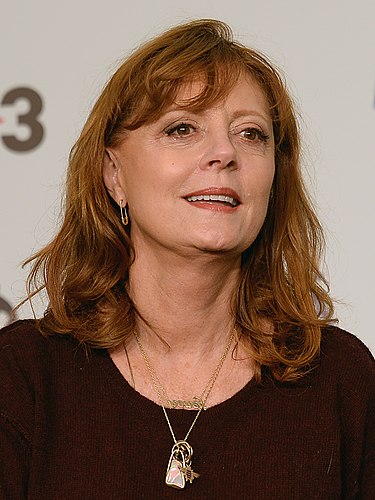 Susan Abigail Sarandon (née Tomalin; born October 4, 1946) is an American actress and activist. She has received an Academy Award, a British Academy Film Award, and a Screen Actors Guild Award, and has been nominated for six Primetime Emmy Awards and nine Golden Globe Awards. She is known for her social and political activism for a variety of causes. She was appointed a UNICEF Goodwill Ambassador in 1999 and received the Action Against Hunger Humanitarian Award in 2006.

She made her Broadway debut in An Evening with Richard Nixon in 1972 and went on to receive Drama Desk Award nominations for the Off-Broadway plays, A Coupla White Chicks Sitting Around Talking (1979) and Extremities (1982). She returned to Broadway in the 2009 revival of Exit the King.

On television, she is a six-time Emmy Award nominee, including for her guest roles on the sitcoms Friends (2001) and Malcolm in the Middle (2002), and appearances in the TV films Bernard and Doris (2007) and You Don't Know Jack (2010). In 2017, Sarandon portrayed Bette Davis in the first season of FX's anthology series Feud, for which she was nominated for both for acting and producing Emmys. She was also nominated for a Daytime Emmy award for executive producing Cool Women in History in 2002.