Every life has a measure of sorrow, and sometimes this is what awakens us.
Steven Tyler
Life Measure Sorrow
I’m really just a country boy.
Steven Tyler
Country
We need to go back to the way it was 30 years ago, when everybody had Grandma and Grandpa, and we were willing to pass moral judgments about right and wrong.
Steven Tyler
Right Wrong Years
I don’t mind being a grandfather; I’ve been a mother for so many years. You just can’t believe what it’s like being a father. Especially when you come out of the chaos of the road to getting married and having children.
Steven Tyler
Being Chaos Children Father Mind Mother Road Years
If it is worth doing, it is worth overdoing.
Steven Tyler
Worth
Humility is really important because it keeps you fresh and new.
Steven Tyler
Humility
I’ve got scarves and boots from’ 1970 that I still wear.
Steven Tyler
We may need to change the way we think. As in Israel, I think there should be a mandatory draft, where you go away for the service of your country for three years.
Steven Tyler
Change Country Draft Israel May Service Years
Fake it until you make it.
Steven Tyler
Life’s a journey, not a destination.
Steven Tyler
Journey Life
My wife and I had decided not to let anybody take pictures of our home because it was just the last place on earth we had that was unscathed. But people have climbed over the fence; they’ve taken aerial shots. They’ve gotten my address and put it on the Internet.
Steven Tyler
Earth Home Internet People Wife
Nothing is ever a barometer. Nothing is ever for sure except that this band has been around forever.
Steven Tyler
Nothing
It was very difficult for me to be the only lyricist in the band.
Steven Tyler
But you’ve reached them, and I’ve always wanted to reach people. I’m the first one to say I love my fans because they love that I took a chance.
Steven Tyler
Chance Fans First Love People
As good as I am, I’m nothing without my band.
Steven Tyler
Nothing
Back then it was nothing like today. So you’d go to the bowling alley. We bowled and you could be in the back and you could make out, you know? And you know how hot it was to make out.
Steven Tyler
Nothing Today
I have to get inspired by something that touches my soul, or rocks my soul.
Steven Tyler
Soul
When that second airplane hit the building, we all changed. We need to get back to some serious thinking.
Steven Tyler
Building Thinking
Great melody over great riffs is, to me, the secret of it all.
Steven Tyler
I had gotten one of the first Korg synthesizers with 300 presets.
Steven Tyler
First
I mean, as long as it doesn’t have a bra attached, guys can take a risk and wear stylish things that went out of style 30 years ago. As things go around, they come around.
Steven Tyler
Risk Style Years
The band’s never taken a year off. Last August we decided to take one, and three months in I was bored to tears.
Steven Tyler
Months Tears
The things that come to those who wait, may be the things left by those who were there first.
Steven Tyler
First May
And the things that come to those that wait may be the things left by those that got there first.
Steven Tyler
First May
I like to come up with the melodies, and I have a lot of ideas as far as structure goes.
Steven Tyler
Ideas
Drugs will get you out of your own way, but we lived it, and that’s dangerous. It can actually turn around on itself and steal your soul, and that’s what happened.
Steven Tyler
Drugs Soul Will
I’m not sure about the selling part, but I’ve always found that the things I’ve worn on tour have moved over to what people wear every day. Sometimes the things I wore in the beginning before I had money were things I put together.
Steven Tyler
Beginning Day Money People Selling
I grew up in New Hampshire. My closest neighbor was a mile away. The deer and the raccoons were my friends. So I would spend time walking through the woods, looking for the most beautiful tropical thing that can survive the winter in the woods in New Hampshire.
Steven Tyler
Friends Time Walking Winter
I quit my band in New York City in 1969 and I got really angry at them. I got angry at one of my guitar players and I dove over the drum set and we got into a fight.
Steven Tyler
Fight Guitar
Now I’m way into suits that I can put on whether I took a shower or not, and wear barefoot and paint my toes black or whatever color the suit is. It’s very cool to wear suits like that. Roll up the sleeves and just say yee-haw.
Steven Tyler
Now
As you know, I’m androgynous. I can wear a jacket that most guys wouldn’t put on. But you make it in guys’ sizes, and suddenly they’re wearing them. I think styles should get back to getting people to wear things that look so good that they don’t care.
Steven Tyler
Care People
If you take all that I’ve learned from Joe and all that Joe has learned from me, and you throw all that into a song, not only are you using the gifts that God gave you, but also all the experiences you’ve had.
Steven Tyler
Gifts God Song 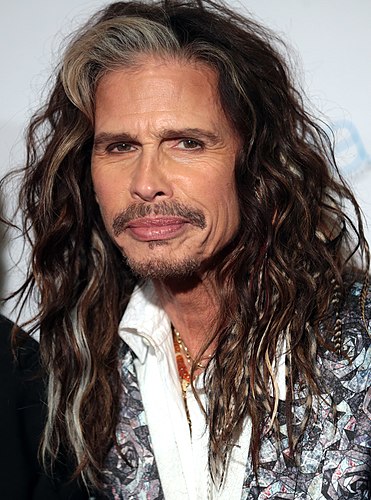 Steven Tyler (born Steven Victor Tallarico; March 26, 1948) is an American singer, songwriter, musician, actor, and former television music competition judge. He is best known as the lead singer of the Boston-based rock band Aerosmith, in which he also plays the harmonica, piano, and percussion. He is known as the "Demon of Screamin'" due to his high screams and his wide vocal range. He is also known for his on-stage acrobatics. During his high-energy performances, Tyler usually dresses in bright, colorful outfits with his trademark scarves hanging from his microphone stand.

In the 1970s, Tyler rose to prominence as the lead singer of Aerosmith, which released such milestone hard rock albums as Toys in the Attic and Rocks, along with a string of hit singles, including "Dream On", "Sweet Emotion" and "Walk This Way". By the late 1970s and early 1980s, Tyler had a heavy drug and alcohol addiction and the band's popularity waned. In 1986, Tyler completed drug rehabilitation and Aerosmith rose to prominence again when Tyler and Perry joined Run–D.M.C. for a re-make of the classic Aerosmith song "Walk This Way", which became a Top 5 hit. Aerosmith subsequently launched a remarkable comeback with the multi-platinum albums Permanent Vacation, Pump, Get a Grip and Nine Lives, which produced a combined thirteen Top 40 singles and won the band numerous awards. During this time, the band embarked on their longest and most extensive concert tours, promoted their singles with conceptual music videos and made notable appearances in television, film and video games.

In the wake of this success, Tyler emerged as one of the most enduring rock icons. Since the late 1980s, he has embarked on several solo endeavors including guest appearances on other artists' music (working with artists as diverse as Alice Cooper, Mötley Crüe, Santana, Pink and Keith Anderson), film and TV roles (including as a judge on American Idol and several cameo and guest appearances in other programs and films), authoring a bestselling book and solo work (including the Top 40 hit single "(It) Feels So Good" in 2011). While tension with his Aerosmith bandmates boiled in 2009 and 2010 after he fell off the stage at a concert, had a relapse with prescription drugs (which he successfully received treatment for in 2009), and signed on to American Idol without telling his bandmates, Tyler has continued to record music and perform with Aerosmith, after more than 48 years in the band. In 2016, Tyler released his debut solo album, We're All Somebody from Somewhere, a country rock album that included the hit single "Love Is Your Name". Tyler supported the album with the "Out on a Limb" Tour. Tyler continues to perform both solo (with the Loving Mary Band as his backing band) as well as with Aerosmith.

Tyler is included among Rolling Stone's 100 Greatest Singers. He was ranked third on Hit Parader's Top 100 Metal Vocalists of All Time. In 2001, he was inducted into the Rock and Roll Hall of Fame with Aerosmith and in 2013, Tyler and his songwriting partner Joe Perry received the ASCAP Founders Award and were inducted into the Songwriters Hall of Fame.