I haven’t heard anything about a reunion show for Sisters. But if the script was good I would do it.
Sela Ward
Sisters
I would consider a half hour sitcom if the script was good.
Sela Ward
No not at all… it is rare for shows to make it as long as Once and Again… It was a pretty good run.
Sela Ward
Pretty
And so much of my life has been about returning home and longing for home, wanting my children to know about my roots. And I thought I can’t be the only one to feel this way so I thought it would be an interesting topic to explore.
Sela Ward
Children Home Life Longing Thought
I always carry Evian bottle and sunscreen.
Sela Ward
Yes and our obsession with youth in our culture and how we, women lie about their age after 35 obsessively and no one wants to let anyone know they’re getting older, et cetera.
Sela Ward
Age Culture Lie Obsession Women Youth
For example, when my mother died, the people who showed up just to put an apron on to cook, people who really do the right thing, so to speak, as my momma would always say to show that they care, a sense of community that we’ve lost so much in our country.
Sela Ward
Care Community Country Example Mother People Right Sense
Well I started studying to help me with these commercial auditions and I just loved it.
Sela Ward
Help
If I wasn’t an actress I would run a fortune 500 company.
Sela Ward
Company Fortune
I have a strong belief in God… I find religion to be a very personal thing… I am also very spiritual.
Sela Ward
Belief God Religion Spiritual
My kids enjoy the Disney program, Lizzy McGuire.
Sela Ward
Disney Kids
However, most of my part, I play a pediatrician, and most of my role had to do with being in another place, staying at the hospital and trying to save kids and stay until people could come. So, it was more based on reality.
Sela Ward
Being Kids People Play Reality Trying
Billy Campbell who is… I… truly one of the most talented actors today.
Sela Ward
Actors Today
It’s about, I did talk about my life in broad strokes and what home meant to me in order to really explore the subject of home and can you go back and what that means for people in that sense of community that we’ve lost.
Sela Ward
Community Home Life Order People Sense Talk
Oh, definitely and I talk about all the things that I really needed to make me happy at that point in time were outside of Mississippi, and now all the things that I need to make me happy are back there.
Sela Ward
Now Talk Time
And so I was doing that and starving and somebody said you should model and I ran when they told me how much money you could make and I did a television commercial the first job.
Sela Ward
First Job Money Television
For me, Los Angeles, New York, where I don’t know my neighbors, where people don’t necessarily care if they know their neighbors, I’m missing things that truly fed my soul when I was younger, the exchanges between people, the caring and the shared history with people.
Sela Ward
Care Caring History Neighbors People Soul
I have decided not to do the spa. Too time consuming.
Sela Ward
Time
I use products from my dermatologist but the best things you can do for your skin, are not smoke always use sunscreen and drink a lot of water.
Sela Ward
Skin Water
You do become very close like a family but because you see each other for such an intense period of time on the set everyday. You really don’t end up socializing that much.
Sela Ward
End Family Time
I had an art teacher who’s the reason I got there in high school who encouraged me to go to Alabama. That’s where she had gone and kept raving over their art department.
Sela Ward
Art Reason School
I think things like food, the food of the south is sort of the common tie that binds us all, Black and White, the sense memories. It’s a very particular part of the country.
Sela Ward
Country Food Memories Sense
As for ABC you can’t take it personally. We had three good years.
Sela Ward
Years
Most of the press is sent to my publicist so I do see most of what is written about me.
Sela Ward
Press
Which is a wonderful irony, I have property there. I go back every chance I get. One of the main reasons I actually wrote the book, agreed to write it having never wanted to do that in my life, very intimidating by the way to write a book.
Sela Ward
Chance Irony Life Property 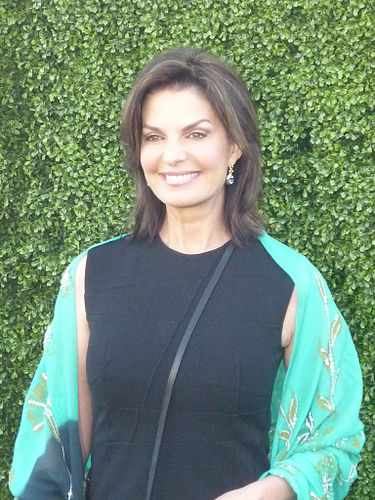 Sela Ann Ward (born July 11, 1956) is an American actress, author, and producer, best known for her roles on television beginning in the early 1980s.

Her breakthrough TV role was as Teddy Reed in the NBC drama series Sisters (1991–96), for which she received her first Primetime Emmy Award for Outstanding Lead Actress in a Drama Series in 1994. She received her second Primetime Emmy Award and Golden Globe Award for Best Actress – Television Series Drama for the leading role of Lily Manning in the ABC drama series Once and Again (1999–2002). Ward later had the recurring role of Stacy Warner in the Fox medical drama House, and starred as Jo Danville in the CBS police procedural CSI: NY (2010–2013).She also played supporting roles in films, including The Man Who Loved Women (1983), Rustlers' Rhapsody (1985), Nothing in Common (1986), Hello Again (1987), The Fugitive (1993), My Fellow Americans (1996), The Day After Tomorrow (2004), The Guardian (2006), The Stepfather (2009), and Gone Girl (2014).

In 2016, she played the President of the United States in the science fiction film Independence Day: Resurgence.