There is a contest old as Eden, which still goes on – the conflict between right and wrong, between error and truth. In this conflict every human being has a part.
Matthew Simpson
Being Conflict Error Old Right Truth Wrong
If you live for any joy on earth, you may be forsaken; but, oh, live for Jesus, and he will never forsake you!
Matthew Simpson
Earth Joy May Will
Angels are spirits, flames of fire; they are higher than man, they have wider connections.
Matthew Simpson
Angels Fire Man Spirits
If you live for pleasure, your ability to enjoy it may pass away and your senses grow dim.
Matthew Simpson
Ability May Pleasure Senses
Man wants to be reconciled to God; wants to know that the past is forgiven.
Matthew Simpson
God Man Past
Mr. Lincoln’s elevation shows that in America every station in life may be honorable; that there is no barrier against the humblest; but that merit, wherever it exists, has the opportunity to be known.
Matthew Simpson
America Life May Merit Opportunity
The realm of immediate or personal knowledge is a narrow circle in which these bodies move; the realm of knowledge derived through faith is as wide as the universe, and old as eternity.
Matthew Simpson
Eternity Faith Knowledge Old Universe
We ourselves can die with comfort and even with joy if we know that death is but a passport to blessedness, that this intellect, freed from all material chains, shall rise and shine.
Matthew Simpson
Comfort Death Intellect Joy
Of history, how little do we know by personal contact; we have lived a few years, seen a few men, witnessed some important events; but what are these in the whole sum of the world’s past.
Matthew Simpson
Events History Men Past World Years
If, then, faith widens the connections, it elevates the man.
Matthew Simpson
Faith Man
We know the past and its great events, the present in its multitudinous complications, chiefly through faith in the testimony of others.
Matthew Simpson
Events Faith Past Present
If you live for your children, they may be smitten down and leave you desolate, or, what is far worse, they may desert you and leave you worse than childless in a cold and unfeeling world.
Matthew Simpson
Children May World
If, then, knowledge be power, how much more power to we gain through the agency of faith, and what elevation must it give to human character.
Matthew Simpson
Character Faith Gain Knowledge Power
Human nature is the same now as when Adam hid from the presence of God; the consciousness of wrong makes us unwilling to meet those whom we have offended.
Matthew Simpson
Consciousness God Human nature Nature Now Wrong
Napoleon was probably the equal at least of Washington in intellect, his superior in education. Both of them were successful in serving the state.
Matthew Simpson
Education Intellect State Successful Washington
Nor was it only from the millions of slaves that chains had been removed; the whole nation had been in bondage; free speech had been suppressed.
Matthew Simpson
Free speech Nation
Washington and the elder Napoleon. Both were brave men; both were true men; both loved their country and dared to expose their lives for their country’s cause.
Matthew Simpson
Cause Country Men Washington
If I know that I shall be as an angel, and more; if I shall behold all God has made; if he shall own me for his son and exalt me to honor in his presence, I shall not fear to die, nor shall I dread the grave where Christ once lay.
Matthew Simpson
Christ Fear God Grave Honor Son
Not in purity or in holiness merely, for in Paradise man was holy, and he shall be holy when redeemed through the sacrifice of Christ and made an heir of heaven.
Matthew Simpson
Christ Heaven Heir Holiness Man Paradise Purity Sacrifice
Sanctification is not regeneration.
Matthew Simpson
We shall see our friends again. We can lay them in the grave; we know they are safe with God.
Matthew Simpson
Friends God Grave
I do not purpose to discuss faith in its dogmatic sense today.
Matthew Simpson
Faith Purpose Sense Today
If we look at the realm of knowledge, how exceedingly small and limited is that part acquired through our own senses; how wide is that we gain from other sources.
Matthew Simpson
Gain Knowledge Senses
If an honest man is the noblest work of God, then Mr. Lincoln’s title to high nobility is clear and unquestioned.
Matthew Simpson
God Man Nobility Work
It is a principle of our nature that feelings once excited turn readily from the object by which they are excited to some other object which may for the time being take possession of the mind.
Matthew Simpson
Being Feelings May Mind Nature Possession Time
Another principle is, the deepest affections of our hearts gather around some human form in which are incarnated the living thoughts and ideas of the passing age.
Matthew Simpson
Age Ideas Living Thoughts
Passing into practical life, illustrations of this fact are found everywhere; the distant, or the unseen, steadies and strengthens us against the rapid whirl of things around us.
Matthew Simpson
Fact Life
The temptations to wrong are many; they spring out of a corrupt nature.
Matthew Simpson
Nature Spring Temptations Wrong
Taking it in its wider and generic application, I understand faith to be the supplement of sense; or, to change the phrase, all knowledge which comes not to us through our senses we gain by faith in others.
Matthew Simpson
Change Faith Gain Knowledge Sense Senses
If you live for fame, men may turn against you.
Matthew Simpson
Fame May Men
The name of Abraham Lincoln is imperishable.
Matthew Simpson
Name 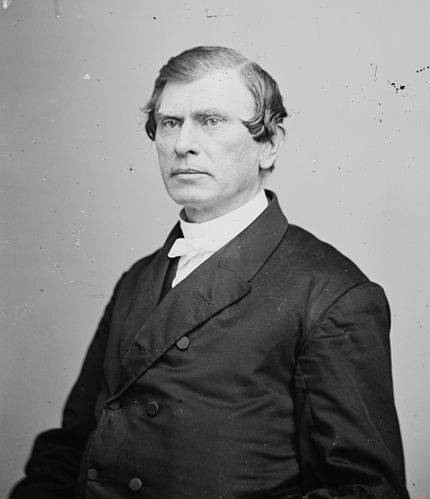 Matthew Simpson (21 June 1811 – 18 June 1884) was an American bishop of the Methodist Episcopal Church, elected in 1852 and based mostly in Chicago [Correction: Philadelphia. Simpson and his wife were fixtures of Society Hill]. During the Reconstruction Era after the Civil War, most evangelical denominations in the North, especially the Methodists, were initially strong supporters of radical policies that favored the Freedmen (former slaves) and distrusted the Southern whites. However by the late 1860s in border state conferences, the MEC North moved well away from their work with the Freedmen's Bureau and often sided with the grievances of Southern white members. Bishop Simpson played a leading role in mobilizing the Northern Methodists for the cause. His biographer calls him the "High Priest of the Radical Republicans."