Yesterday, the president met with a group he calls the coalition of the willing. Or, as the rest of the world calls them, Britain and Spain.
Jon Stewart
President Rest Spain World Yesterday
The seven marvels that best represent man’s achievements over the last 2,000 years will be determined by Internet vote… so look for Howard Stern’s Private Parts to come in No. 1.
Jon Stewart
Internet Man Vote Will Years
There is no such thing as an impartial jury because there are no impartial people. There are people that argue on the web for hours about who their favorite character on “Friends” is.
Jon Stewart
Character Favorite Jury People
I can be in 20 movies. But I’ll never be an actor.
Jon Stewart
Actor Movies
McVeigh’s lawyer got him the death penalty, which, quite frankly, I could have done.
Jon Stewart
Death
I’ve always liked Atlanta. And not just for the strip clubs, but the shopping and the food.
Jon Stewart
Food
More than 150 heads of state attended the UN Summit, giving New Yorkers a chance to get in touch with prejudices they didn’t even know they had.
Jon Stewart
Chance Giving State
I’m too short to host a late-night talk show. It’s like the bar at an amusement-park ride. You have to be six foot two or over.
Jon Stewart
Amusement Talk
I was born with an adult head and a tiny body. Like a ‘Peanuts’ character.
Jon Stewart
Body Character
We have it. The smoking gun. The evidence. The potential weapon of mass destruction we have been looking for as our pretext of invading Iraq. There’s just one problem – it’s in North Korea.
Jon Stewart
Destruction Iraq Potential Smoking
Here’s the point – you’re looking at affirmative action, and you’re looking at marijuana. You legalize marijuana, no need for quotas, because really, who’s gonna wanna work?
Jon Stewart
Action Work
I’m not just a boy toy. I have feelings and dreams like anybody else.
Jon Stewart
Dreams Feelings
If you watch the news and don’t like it, then this is your counter program to the news.
Jon Stewart
News
You just have to keep trying to do good work, and hope that it leads to more good work. I want to look back on my career and be proud of the work, and be proud that I tried everything. Yes, I want to look back and know that I was terrible at a variety of things.
Jon Stewart
Career Hope Trying Variety Want Work
President Bush remained undeterred by the massive display of American opposition, even though much of it came from the hundreds of thousands of voters who supported him by voting for Nader.
Jon Stewart
American Opposition President Voting
The Supreme Court ruled that disabled golfer Casey Martin has a legal right to ride in a golf cart between shots at PGA Tour events. Man, the next thing you know, they’re going to have some guy carry his clubs around for him.
Jon Stewart
Court Events Golf Legal Man Martin Right
Many of our soldiers are stationed at Camp Coyote just south of the Iraqi border. This is how you know we have a strong army, when you can actually tell your enemy exactly where your camp is and what its name is.
Jon Stewart
Army Enemy Name Soldiers
I’ve been to Canada, and I’ve always gotten the impression that I could take the country over in about two days.
Jon Stewart
Canada Country Impression
I heard Dennis Kucinich say in a debate, ‘When I’m president… and I just wanted to stop him and say, ‘Dude.’
Jon Stewart
Debate President
If the evens of September 11, 2001, have proven anything, it’s that the terrorists can attack us, but they can’t take away what makes us American – our freedom, our liberty, our civil rights. No, only Attorney General John Ashcroft can do that.
Jon Stewart
American Civil rights Freedom Liberty
Ahh, Earth Day, the only day of the year where being able to hacky-sack will get you laid.
Jon Stewart
Being Day Earth Will
I celebrated Thanksgiving in an old-fashioned way. I invited everyone in my neighborhood to my house, we had an enormous feast, and then I killed them and took their land.
Jon Stewart
Land Old Thanksgiving
There are a hell of a lot of jobs that are scarier than live comedy. Like standing in the operating room when a guy’s heart stops, and you’re the one who has to fix it!
Jon Stewart
Comedy Heart Hell Jobs
Insomnia is my greatest inspiration.
Jon Stewart
Inspiration 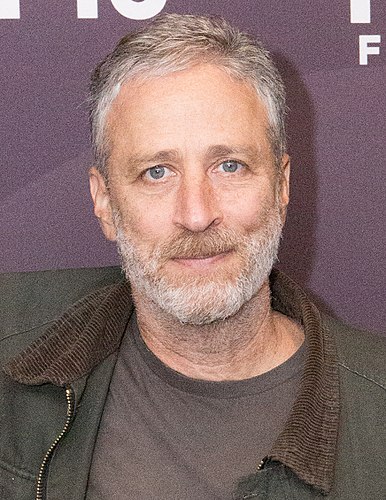 Stewart started as a stand-up comedian but branched into television as host of Short Attention Span Theater for Comedy Central. He went on to host The Jon Stewart Show and then You Wrote It, You Watch It, both on MTV. Stewart has also had several film roles as an actor but did few cinematic projects after becoming host of The Daily Show in 1999. He was also a writer and co-executive producer of the show. After Stewart joined, The Daily Show steadily gained popularity and critical acclaim, and during his tenure, The Daily Show won 22 Primetime Emmy Awards.

Stewart is known as an outspoken, humorous critic of personality-driven media shows, in particular those of the U.S. media networks such as CNN, Fox News, and MSNBC. Critics say Stewart benefits from a double standard: he critiques other news shows from the safe, removed position of his "news satire" desk. Stewart agrees, saying that neither his show nor Comedy Central purport to be anything other than satire and comedy. In spite of its self-professed entertainment mandate, The Daily Show has been nominated for news and journalism awards among its accolades. Stewart hosted the 78th and 80th Academy Awards. He is the co-author of America (The Book): A Citizen's Guide to Democracy Inaction, which was one of the best-selling books in the U.S. in 2004, and Earth (The Book): A Visitor's Guide to the Human Race, released in 2010.