Every week it’s another opportunity to really make that work and figure out how to make it work better. And I love that it’s like theater, too, and the audience, and it’s so short. It’s only 20 minutes. It’s like a haiku or something.
Joan Cusack
Love Opportunity Theater Work
I play- it’s kind of like a slice-of-life, LA women in their forties, playing forty kind of what’s their friendship like, and what’s their life like and so I just play one of the four friends.
Joan Cusack
Friendship Life Play Women
Can they do both? That’s a huge balance, I think, with kids- trying to find the right- it’s everything, you know, it’s social life, it’s academics, it’s sports.
Joan Cusack
Balance Kids Life Right Sports Trying
I love Chicago. It’s such a great town, and it’s got great culture and great history, and it’s not as extreme as LA or New York, and it’s just- it’s hard for me for work, because I don’t live and work in the same place and that’s tough. But I’m- I love it.
Joan Cusack
Chicago Culture Extreme History Love Work
You know, I loved math. My mom was a math teacher.
Joan Cusack
Mom 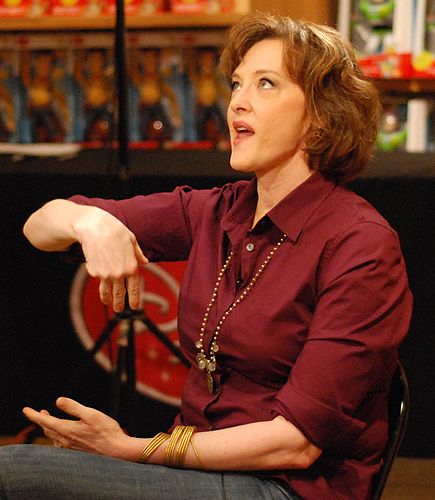 Joan Mary Cusack (born October 11, 1962) is an American actress. She received Academy Award nominations for Best Supporting Actress for her roles in the romantic comedy-drama Working Girl (1988) and the romantic comedy In & Out (1997), as well as one Golden Globe nomination for her performance in the latter. She is also the voice of Jessie in the Toy Story franchise.

Cusack was a cast member on the comedy sketch show Saturday Night Live from 1985 to 1986. She starred on the Showtime hit drama/comedy Shameless as Sheila Gallagher (née Jackson), a role for which she has received five consecutive Emmy Award nominations, winning for the first time in 2015. She is the sister of actress Ann Cusack and actor John Cusack.