We fear violence less than our own feelings. Personal, private, solitary pain is more terrifying than what anyone else can inflict.
Jim Morrison
Fear Feelings Pain Violence
Hatred is a very underestimated emotion.
Jim Morrison
Emotion Hatred
I am interested in anything about revolt, disorder, chaos-especially activity that seems to have no meaning. It seems to me to be the road toward freedom… Rather than starting inside, I start outside and reach the mental through the physical.
Jim Morrison
Chaos Disorder Freedom Meaning Road
Death makes angels of us all and gives us wings where we had shoulders smooth as ravens claws.
Jim Morrison
Angels Death Ravens
Whoever controls the media, controls the mind.
Jim Morrison
Media Mind
It’s like gambling somehow. You go out for a night of drinking and you don’t know where your going to end up the next day. It could work out good or it could be disastrous. It’s like the throw of the dice.
Jim Morrison
Day Drinking End Gambling Night Work
I believe in a long, prolonged, derangement of the senses in order to obtain the unknown.
Jim Morrison
Order Senses
The most loving parents and relatives commit murder with smiles on their faces. They force us to destroy the person we really are: a subtle kind of murder.
Jim Morrison
Faces Force Murder Parents Relatives Smiles
Film spectators are quiet vampires.
Jim Morrison
Film Quiet
There are things known and things unknown and in between are the doors.
Jim Morrison
Where’s your will to be weird?
Jim Morrison
Will
The time to hesitate is through.
Jim Morrison
Time
Expose yourself to your deepest fear; after that, fear has no power, and the fear of freedom shrinks and vanishes. You are free.
Jim Morrison
Fear Freedom Power
When you make your peace with authority, you become authority.
Jim Morrison
Authority Peace
Violence isn’t always evil. What’s evil is the infatuation with violence.
Jim Morrison
Evil Infatuation Violence
The most important kind of freedom is to be what you really are. You trade in your reality for a role. You give up your ability to feel, and in exchange, put on a mask.
Jim Morrison
Ability Freedom Reality Trade
Blake said that the body was the soul’s prison unless the five senses are fully developed and open. He considered the senses the ‘windows of the soul.’ When sex involves all the senses intensely, it can be like a mystical experence.
Jim Morrison
Body Open Prison Senses Sex Soul
Music inflames temperament.
Jim Morrison
Music Temperament
This is the strangest life I’ve ever known.
Jim Morrison
Life
Drugs are a bet with your mind.
Jim Morrison
Drugs Mind
Actually I don’t remember being born, it must have happened during one of my black outs.
Jim Morrison
Being
Sex is full of lies. The body tries to tell the truth. But, it’s usually too battered with rules to be heard, and bound with pretenses so it can hardly move. We cripple ourselves with lies.
Jim Morrison
Body Lies Rules Sex Truth
I see myself as an intelligent, sensitive human, with the soul of a clown which forces me to blow it at the most important moments.
Jim Morrison
Moments Soul
I like any reaction I can get with my music. Just anything to get people to think. I mean if you can get a whole room full of drunk, stoned people to actually wake up and think, you’re doing something.
Jim Morrison
Music People
I think in art, but especially in films, people are trying to confirm their own existences.
Jim Morrison
Art People Trying
People fear death even more than pain. It’s strange that they fear death. Life hurts a lot more than death. At the point of death, the pain is over. Yeah, I guess it is a friend.
Jim Morrison
Death Fear Friend Life Pain People
Some of the worst mistakes of my life have been haircuts.
Jim Morrison
Life Mistakes
I think of myself as an intelligent, sensitive human being with the soul of a clown which always forces me to blow it at the most important moments.
Jim Morrison
Being Moments Soul
I like people who shake other people up and make them feel uncomfortable.
Jim Morrison
People
If my poetry aims to achieve anything, it’s to deliver people from the limited ways in which they see and feel.
Jim Morrison
People Poetry
Love cannot save you from your own fate.
Jim Morrison
Fate Love
I’m interested in anything about revolt, disorder, chaos, especially activity that appears to have no meaning. It seems to me to be the road toward freedom.
Jim Morrison
Chaos Disorder Freedom Meaning Road
Friends can help each other. A true friend is someone who lets you have total freedom to be yourself – and especially to feel. Or, not feel. Whatever you happen to be feeling at the moment is fine with them. That’s what real love amounts to – letting a person be what he really is.
Jim Morrison
Feeling Freedom Friend Friends Help Love
Listen, real poetry doesn’t say anything; it just ticks off the possibilities. Opens all doors. You can walk through anyone that suits you.
Jim Morrison
Poetry Possibilities
A friend is someone who gives you total freedom to be yourself.
Jim Morrison
Freedom Friend
The appeal of cinema lies in the fear of death.
Jim Morrison
Cinema Death Fear Lies
Each generation wants new symbols, new people, new names. They want to divorce themselves from their predecessors.
Jim Morrison
Divorce Names People Want 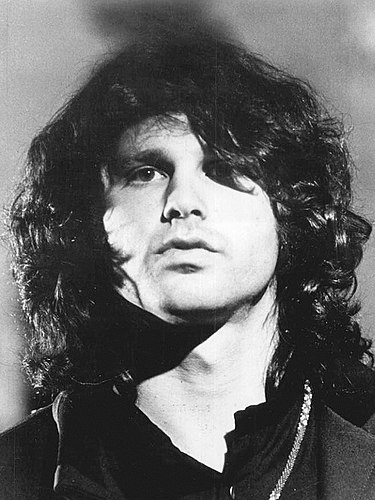 James Douglas "Jim" Morrison (December 8, 1943 – July 3, 1971) was an American singer, songwriter and poet, best remembered as the lead vocalist of the rock band the Doors. Due to his poetic lyrics, distinctive voice, wild personality, performances, and the dramatic circumstances surrounding his life and early death, Morrison is regarded by music critics and fans as one of the most iconic and influential frontmen in rock music history. Since his death, his fame has endured as one of popular culture's most rebellious and oft-displayed icons, representing the generation gap and youth counterculture.Morrison co-founded the Doors during the summer of 1965 in Venice, California. The band spent two years in obscurity until shooting to prominence with their #1 single in the United States, "Light My Fire", taken from their self-titled debut album. Morrison recorded a total of six studio albums with the Doors, all of which sold well and received critical acclaim. Though the Doors recorded two more albums after Morrison's death, the loss of him crippled the band and they split up in 1973. In 1993, Jim Morrison, as a member of the Doors, was inducted into the Rock and Roll Hall of Fame.

Morrison was also well known for improvising spoken word poetry passages while the band played live. Morrison was ranked #47 on Rolling Stone's list of the "100 Greatest Singers of All Time", and number 22 on Classic Rock magazine's "50 Greatest Singers in Rock." Ray Manzarek, who co-founded the Doors with him, said Morrison "embodied hippie counterculture rebellion."Morrison developed an alcohol dependency during the 1960s, which at times affected his performances on stage. He died unexpectedly at the age of 27 in Paris. As no autopsy was performed, the cause of Morrison's death remains unknown.