I think “Hero” is not a real martial arts movie; it is not about violence, or formula.
Jet Li
Formula Violence
I’ve been learning martial arts since I was 8 years old.
Jet Li
Learning Old Years
Zhang Yimou is an artist. Sometimes we did only two or three shots a day because we were waiting for the sun.
Jet Li
Artist Day Sun Waiting
Zhang is a friend of mine: he said forget about acting and just do normal things in the movie.
Jet Li
Acting Forget Friend
I study more of truth and enlightening. I had to go the next level to talk about life.
Jet Li
Life Study Talk Truth
A weapon isn’t good or bad, depends on the person who uses it.
Jet Li
Hero shows you how to solve the problem – yourself.
Jet Li
Everywhere I go, I still have time to meditate. People think meditating is sitting there, nobody bothering you, but you can even talk and still meditate.
Jet Li
People Talk Time
I spend more time learning about Buddhism than English, which is why my English today is still bad.
Jet Li
Buddhism English Learning Time Today
When I lived in Hong Kong, I felt that Hong Kong is my family.
Jet Li
Family
You can use martial arts to tell a different story. Ang Lee used martial arts in “Crouching Tiger, Hidden Dragon” to talk about love.
Jet Li
Love Talk
Zhang Yimou tried to use martial arts to talk about Chinese culture, Chinese people. What do they think, what do they want and what do they hope.
Jet Li
Culture Hope People Talk Want
Wushu is a move in Chinese, a physical move. An attack. Wushu is like an art.
Jet Li
Art
I never stopped studying Buddhism. In the past few years, in between movies, I do a retreat.
Jet Li
Buddhism Movies Past Years
I want to thank my mum, my daddy, my coach, my teacher, everybody in my life.
Jet Li
Coach Life Want
Zhang Yimou is one of the best directors on mainland China.
Jet Li
Every President that went to China, I would meet them and have dinner and talk about the past and the future. That was in the ’70s.
Jet Li
Future Past President Talk
Bruce Lee was very famous. I watched his movies and he is amazing. He is a martial arts master, his philosophy, his movement, both physically and mentally, were very strong.
Jet Li
Famous Movies Philosophy
I knew nothing about martial arts. The coach told me I was talented with learning martial arts, and put me in a school. Three years later I got my first championship in China.
Jet Li
Coach First Learning Nothing School Years
Love is more powerful than kicking ass.
Jet Li
Love
My wife wanted my children to have some Chinese culture and education. She believes the children need to learn two languages and two cultures.
Jet Li
Children Culture Education Wife
I need to talk about Chinese culture. We have deep, strong philosophy and culture. I want to share some information, tell the worldwide audience.
Jet Li
Culture Deep Information Philosophy Talk Want
I believe the world is one big family, and we need to help each other.
Jet Li
Family Help World
This film “Hero” talks about the peace of Chinese people.
Jet Li
Film Peace People 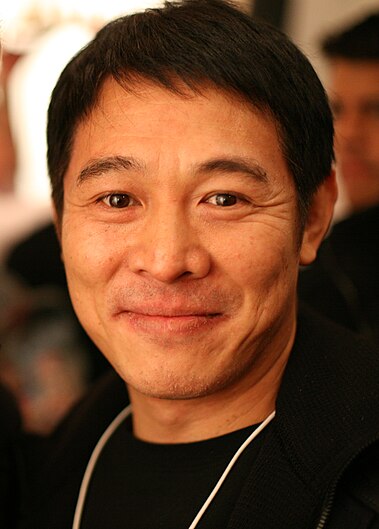 Li Lianjie (born 26 April 1963), better known by his stage name Jet Li, is a Chinese film actor, film producer, martial artist, and retired Wushu champion who was born in Beijing. He is a naturalized Singaporean citizen.After three years of training with acclaimed Wushu teacher Wu Bin, Li won his first national championship for the Beijing Wushu Team. After retiring from competitive Wushu at age 19, he went on to win great acclaim in China as an actor, making his debut with the film Shaolin Temple (1982). He went on to star in many critically acclaimed martial arts epic films, most notably as the lead in Zhang Yimou's Hero (2002), Fist of Legend (1994), and the first three films in the Once Upon a Time in China series (1991–1993), in which he portrayed folk hero Wong Fei-hung.

Li's first role in a non-Chinese film was as a villain in Lethal Weapon 4 (1998), and his first leading role in a Hollywood film was as Han Sing in Romeo Must Die (2000). He has gone on to star in many international action films, including in French cinema with the Luc Besson-produced films Kiss of the Dragon (2001) and Unleashed (2005). He co-starred in The One (2001) and War (2007) with Jason Statham, The Forbidden Kingdom (2008) with Jackie Chan, all three of The Expendables films with Sylvester Stallone, and as the title character villain in The Mummy: Tomb of the Dragon Emperor (2008).