That’s why we have practice rounds. We make the adjustments as we go around, try and find out how to play the golf course the best we can. No big deal, it’s nothing to me, it’s the same for me as it is to everybody and we’re all trying to understand it.
Greg Norman
Golf Nothing Play Practice Trying
I’ve really got no complaints about the way I played, just extremely frustrating with the putter and I’m sure there’s a lot of other players saying the same thing except the guy who’s going to win the golf tournament.
Greg Norman
Complaints Golf Saying
I don’t see myself playing or adjusting my schedule for senior tournament golf.
Greg Norman
Golf
Being away for the weekends, and me being the international player that I have been for those 30 years, I’ve spent a lot more time flying around the world, playing different golf tournaments around the world.
Greg Norman
Being Flying Golf Time World Years
The game of golf doesn’t come rushing back to you. Last week I made a couple of fundamental mistakes that I probably wouldn’t have made in the heat of the battle back when I was in my heyday, and those things have got to come back.
Greg Norman
Battle Golf Mistakes
I always wanted to be the best I could be at whatever I did. I didn’t want to be the number one golfer in the world. I just wanted to be as good as I could be. I work hard, I push myself hard, and I probably even expect too much of myself.
Greg Norman
Want Work World
When I turned 50, I said to myself, well, if this is what it’s like turning 50, I can’t wait to turn 60 because I still felt very, very mentally and physically good, outside my back surgery.
Greg Norman
Well, I think any national championship is an extremely important championship to play in.
Greg Norman
Play
So my game is solid. So that obviously makes me feel confident, that like anybody else in this field, you name them, I feel like I’ve got the ability to win the golf tournament just as much as they have, and that’s the way I’m going to take it.
Greg Norman
Ability Golf Name
When you see that many people with a smile on their face, then you must be doing something right.
Greg Norman
People Right Smile
I’m not interested at all in playing more than 12, 15 tournaments a year on an annual basis because like all the old guys out here on this Tour, we’ve played golf for nearly 30 years of our lives.
Greg Norman
Golf Old Years
The players have competed on the level the last 25 or 30 years are always going to be the players that compete at a high level. These guys practice hard, they work on their game, they still hit the ball extremely well.
Greg Norman
Practice Work Years
My doctor asked me how many golf balls I had hit in my career. I’m lying there in bed calculating somewhere between four and five million golf balls I had hit to do that on my body.
Greg Norman
Bed Body Career Golf Lying
I mean, I can actually say goodbye to the game of golf, never hit another golf shot the rest of my life and I’d be happy because I can get back in life without any rotation.
Greg Norman
Golf Goodbye Life Rest
I think it’s great the opportunity is given to all of us really to come out and play major championships after the real major championships have gone beyond us.
Greg Norman
Opportunity Play
You know, like I said, I’m not going to adjust my Senior Tour schedule.
Greg Norman
To me I’ve just really, really found a relaxed, peaceful side of my life and I’m enjoying it.
Greg Norman
Life
On 18 you’ve got to drive it up a gnat’s ass.
Greg Norman
People in this room must have back problems, I’m sure some of us do, and it is really, really one of the worst pains and debilitating parts of your body that you can actually have because you really can’t do anything in your life when you have it.
Greg Norman
Body Life People Problems
Obviously it’s my second senior event, and I’m tired obviously coming back from the British Open, from surgery, which was priority No. 1, did that successfully, and each week since the British Open I’ve felt in pretty good control of my golf game.
Greg Norman
Control Golf Open Pretty
What’s a good tournament for him? Winning it. He’s good enough.
Greg Norman
Winning
I wouldn’t call it bitter. I think it’s just sweet. I’ve always believed my life seems like it’s gotten better and better as each decade has gone by. So I don’t see any I don’t see any bitterness about it.
Greg Norman
Bitterness Life
I owe a lot to my parents, especially by mother and my father.
Greg Norman
Father Mother Parents 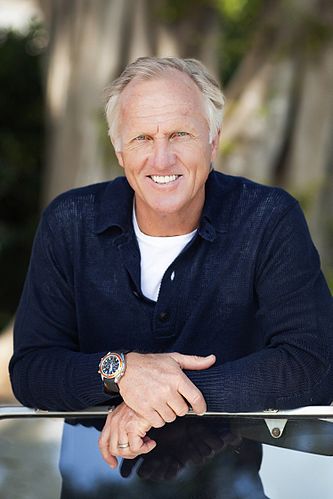 Gregory John Norman AO (born 10 February 1955) is an Australian professional golfer and entrepreneur who spent 331 weeks as the world's Number 1 Official World Golf Rankings ranked golfer in the 1980s and 1990s. He has won 91 international tournaments, including 20 PGA Tour tournaments and two majors: The Open Championships in 1986 and 1993. Norman also earned thirty top-10 finishes and was the runner-up 8 times in majors throughout his career. He was inducted into the World Golf Hall of Fame in 2001 with the highest percentage of votes (80%) of any golfer to date. In a reference to his blond hair, size, aggressive golf style and his birthplace's native coastal animal, Norman's nickname is "The Great White Shark" (often shortened to just "The Shark"), which he earned after his play at the 1981 Masters.During and after his playing career, Norman engaged in numerous entrepreneurial and philanthropic endeavors. He currently serves as the chairman and CEO of the Greg Norman Company, a global corporation with a portfolio of companies in fields like apparel, interior design, real estate, private equity, golf course design, and more. Norman has also donated to and established numerous charities and charity events like the QBE Shootout which benefits the CureSearch for Children's Cancer fund. He became a Trustee of the Environmental Institute for Golf in 2004 and received the Golf Writers Association of America's Bartlett Award in 2008 for his philanthropic endeavors.In 2009 as part of the Q150 celebrations, Greg Norman was announced as one of the Q150 Icons of Queensland for his role as a "sports legend".