Yet none use their words more recklessly than the strong, who have not been sobered by the rebuffs and uncertainties of life.
George A. Smith
Life Words
There is no truth which the prophets press more steadily upon Israel than that all their national life lies in the sight and on the care of God.
George A. Smith
Care God Israel Lies Life Press Sight Truth
Man does find in Nature deliverance from himself, oblivion of his past, with peace and purity!
George A. Smith
Man Nature Past Peace
The heart which finds life in material wealth is usually certain to go farther and seek for more in the satisfaction of base and sullen appetites.
George A. Smith
Heart Life Satisfaction Wealth
Happiness, contentment, the health and growth of the soul, depend, as men have proved over and over again, upon some simple issue, some single turning of the soul.
George A. Smith
Contentment Growth Happiness Health Men Soul
The whole mystery of temptation is to have sins suggested to us, and to be swept after them by a sudden enthusiasm, which sometimes feels as strong as the Spirit of God ever made in us the enthusiasm for virtue.
George A. Smith
Enthusiasm God Mystery Spirit Temptation Virtue
Into every soul, however purged and fenced, evil appears to have as much freedom of entrance as God Himself.
George A. Smith
Evil Freedom God Soul
To us sin has not become any less of a mystery or a pain.
George A. Smith
Mystery Pain Sin
Jesus Christ tells us that a man cannot be wrong if he argues towards God from what he finds best in himself.
George A. Smith
Christ God Man Wrong
Our enemies are our evil deeds and their memories, our pride, our selfishness, our malice, our passions, which by conscience or by habit pursue us with a relentlessness past the power of figure to express.
George A. Smith
Conscience Deeds Enemies Evil Habit Malice Memories Past Power Pride Selfishness
The seasons come up undisturbed by crime and war.
George A. Smith
Crime Seasons War
Power and position often make a man trifle with the truth.
George A. Smith
Man Power Trifle Truth
We must seek the loving-kindness of God in all the breadth and open-air of common life.
George A. Smith
God Life Open
God is stronger than their strength, more loving than their uttermost love, and in so far as they have loved and sacrificed themselves for others, they have obtained the infallible proof, that God too lives and loves and gives Himself away.
George A. Smith
God Love Proof Strength
Let those who, still in their youth, have preserved their faith and fullness of hope, keep looking up.
George A. Smith
Faith Hope Youth
Lives are changed by a moment’s listening to conscience, by a single and quiet inclination of the mind.
George A. Smith
Conscience Listening Mind Quiet
If we have a heart for the magnitudes of life, it will not seem vain to believe that God Himself should guard it.
George A. Smith
God Heart Life Will 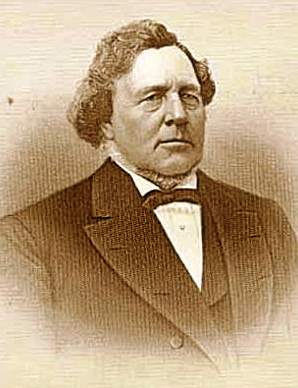 George Albert Smith (June 26, 1817 – September 1, 1875) (known throughout his life as George A. Smith) was an early leader in the Latter Day Saint movement. He served in the Quorum of the Twelve Apostles and as a member of the First Presidency of The Church of Jesus Christ of Latter-day Saints (LDS Church).

Smith was a prominent leader in the settlement of many communities in southern Utah, and played a role in the chain of events preceding the Mountain Meadows Massacre on September 11, 1857. The city of St. George, Utah, may have been named after him.