I say what I want to say and do what I want to do. There’s no in between. People will either love you for it or hate you for it.
Eminem
Hate Love People Want Will
To the people I forgot, you weren’t on my mind for some reason and you probably don’t deserve any thanks anyway.
Eminem
Mind People Reason
I don’t hate women – they just sometimes make me mad.
Eminem
Hate Women
I’d go to, like, six different schools in one year. We were on welfare, and my mom never ever worked.
Eminem
Mom Schools Welfare
I’m stupid, I’m ugly, I’m dumb, I smell. Did I mention I’m stupid?
Eminem
Dumb Ugly
My thing is this; if I’m sick enough to think it, then I’m sick enough to say it.
Eminem
The truth is you don’t know what is going to happen tomorrow. Life is a crazy ride, and nothing is guaranteed.
Eminem
Life Nothing Tomorrow Truth
Yeah, I did see where the people dissing me were coming from. But, it’s like, anything that happened in the past between black and white, I can’t really speak on it, because I wasn’t there. I don’t feel like me being born the color I am makes me any less of a person.
Eminem
Being Past People
Dealing with backstabbers, there was one thing I learned. They’re only powerful when you got your back turned.
Eminem
I think my first album opened a lot of doors for me to push the freedom of speech to the limit.
Eminem
First Freedom Speech
My only scheme was to be a rapper.
Eminem
I was poor white trash, no glitter, no glamour, but I’m not ashamed of anything.
Eminem
Glamour Poor
These times are so hard, and they’re getting even harder.
Eminem
Sometimes I feel like rap music is almost the key to stopping racism.
Eminem
Key Music Racism Rap
Somewhere deep down there’s a decent man in me, he just can’t be found.
Eminem
Deep Man
Personally, I just think rap music is the best thing out there, period. If you look at my deck in my car radio, you’re always going to find a hip-hop tape; that’s all I buy, that’s all I live, that’s all I listen to, that’s all I love.
Eminem
Car Love Music Rap
There was a while when I was feeling like, ‘Damn, if I’d just been born black, I would not have to go through all this’.
Eminem
Feeling
If there’s not drama and negativity in my life, all my songs will be really wack and boring or something.
Eminem
Drama Life Negativity Songs Will
Say there’s a white kid who lives in a nice home, goes to an all-white school, and is pretty much having everything handed to him on a platter – for him to pick up a rap tape is incredible to me, because what that’s saying is that he’s living a fantasy life of rebellion.
Eminem
Fantasy Home Life Living Pretty Rap Rebellion Saying School
My father? I never knew him. Never even seen a picture of him.
Eminem
Father
I come from Detroit where it’s rough and I’m not a smooth talker.
Eminem
It sometimes feels like a strange movie, you know, it’s all so weird that sometimes I wonder if it is really happening.
Eminem
Wonder
I always wished for this, but it’s almost turning into more of a nightmare than a dream.
Eminem
Dream
A lot of truth is said in jest.
Eminem
Jest Truth
Anybody with a sense of humor is going to put on my album and laugh from beginning to end.
Eminem
Beginning End Humor Sense
I am whatever you say I am; if I wasn’t, then why would you say I am.
Eminem
I need drama in my life to keep making music.
Eminem
Drama Life Music
Before I was famous, when I was just working in Gilbert’s Lodge, everything was moving in slow motion.
Eminem
Famous
When you’re a little kid, you don’t see color, and the fact that my friends were black never crossed my mind. It never became an issue until I was a teenager and started trying to rap.
Eminem
Fact Friends Mind Rap Trying
It’d be stupid for me to sit here and say that there aren’t kids who look up to me, but my responsibility is not to them. I’m not a baby sitter.
Eminem
Baby Kids Responsibility
I want to solidify as an artist and show that as I grow as a person and make mistakes and learn from them, I’m going to grow artistically.
Eminem
Artist Mistakes Want
Fame hit me like a ton of bricks.
Eminem
Fame
I am who I am and I say what I think. I’m not putting a face on for the record.
Eminem
I might talk about killing people, but that doesn’t mean I do it.
Eminem
Killing People Talk 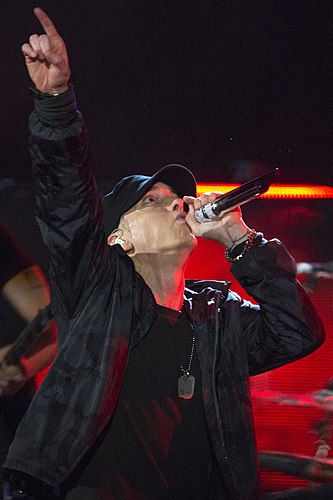 Marshall Bruce Mathers III (born October 17, 1972), known professionally as Eminem (often stylized as EMINƎM), is an American rapper, songwriter, record producer, record executive, and actor. He is consistently cited as one of the greatest and most influential artists of all time in any genre, with Rolling Stone placing him in its list of the 100 Greatest Artists of All Time and labelling him the "King of Hip Hop".After his debut album Infinite (1996) and then Slim Shady EP (1997), Eminem signed with Dr. Dre's Aftermath Entertainment and subsequently achieved mainstream popularity in 1999 with The Slim Shady LP, which earned him his first Grammy Award for Best Rap Album. His next two releases, 2000's The Marshall Mathers LP and 2002's The Eminem Show, were worldwide successes, with each being certified diamond in U.S. sales and both winning Best Rap Album Grammy Awards—making Eminem the first artist to win the award for three consecutive LPs. They were followed by Encore in 2004, another critical and commercial success. Eminem went on hiatus after touring in 2005, releasing Relapse in 2009 and Recovery in 2010. Both won Grammy Awards and Recovery was the best-selling album of 2010 worldwide, the second time he had the international best-selling album of the year (after The Eminem Show). Eminem's eighth album, 2013's The Marshall Mathers LP 2, won two Grammy Awards, including Best Rap Album; it expanded his record for the most wins in that category and his Grammy total to 15. These were followed by 2017's Revival and 2018's Kamikaze.In addition to his solo career, Eminem is an original member of the Midwest hip hop groups Soul Intent and D12. He is also known for his collaborations with fellow Detroit-based rapper Royce da 5'9"; the two are collectively known as Bad Meets Evil. Eminem has developed other ventures, including Shady Records, with manager Paul Rosenberg, which helped launch the careers of artists such as 50 Cent. Eminem has also established his own channel, Shade 45, on Sirius XM Radio. In November 2002, he starred in the hip hop film 8 Mile, which won the Academy Award for Best Original Song for "Lose Yourself", becoming the first rap artist to ever win the award. Eminem has made cameo appearances in the films The Wash (2001), Funny People (2009), and The Interview (2014), and the television series Entourage (2010).