So why sign your name in blood for more? It seemed like a sensible arrangement for me. I didn’t sell large numbers of records and the record company paid advances they rarely recouped.
David Knopfler
Blood Company Name Numbers
I don’t know to what extent someone can BECOME an artist – you either are or you aren’t – and if you are you’ll HAVE to make your way to some kind of sickly light, no matter how terrible the soil you were seeded in your nature will out somehow.
David Knopfler
Artist Light Nature Will
Trust the tale, not the teller.
David Knopfler
Trust
Oh yeah – for sure – hardly a week doesn’t go by when I don’t hear something wonderful that someone has made in some low-budget situation, primarily with a view to selling a few hundred copies at their concerts.
David Knopfler
Selling
My faith, inasmuch as I have any, is more like a kind of Joseph Campbell thing, and even that frequently finds itself tested to oblivion in siren waters.
David Knopfler
Faith
I always liked the magic of poetry but now I’m just starting to see behind the curtain of even the best poets, how they’ve used, tried and tested craft to create the illusion. Wonderful feeling of exhilaration to finally be there.
David Knopfler
Feeling Illusion Magic Now Poetry Poets
There’s nothing like doing something wrong to learn how it might be done better.
David Knopfler
Nothing Wrong
If you feel driven and compelled to make your work and to be fiercely original and have something unique to say, in a compelling way, then chances are the helpers will be there for you the doors will open some, the ice will crack.
David Knopfler
Open Will Work
Whatever the opposite of regret is best describes how I’ve always felt about that decision – it opened me up to a million creative opportunities I needed to experience away from the bull and distorting mirrors that fame engenders.
David Knopfler
Decision Experience Fame Regret
I’d make a terrible practitioner of any religion in any formal setting.
David Knopfler
Religion
In some ways it’s taken me decades to come clean and make honest work – and still to this day, sometimes I find myself wanting to hide behind my work and deny the more biographical aspects.
David Knopfler
Day Work
I’ve been getting pretty focused about that recently, and even considered doing a masters degree to polish up the craft. I’ve been pretty lucky in that I seem to have found people online who are willing to constructively tear it apart for me, and indicate its weaknesses.
David Knopfler
People Pretty
I feel like I’m stepping into a place of spiritual contemplation every time I enter a studio; it’s always had a certain magic to me that has never worn off with familiarity.
David Knopfler
Contemplation Familiarity Magic Spiritual Time
Now I’m having to live with sales of around 50,000 per album – but I’m pretty content with my place in the general scheme of things, even if it’s meant I don’t drive a fancy car and can’t afford grand vacations.
David Knopfler
Car Content Fancy Now Pretty Sales
Now that I’m staring down the barrel of the last act of my life, I’m less excited about control and solo effort, and I resent the way the business aspects interfere with my space for creative writing.
David Knopfler
Act Business Control Effort Life Now Space Writing
The school was prone to dishing out punishments for anything creative that didn’t fit with expectation – I just followed the logic and figured the folk club was probably much the same.
David Knopfler
Expectation Folk Logic School
I didn’t really escape that gravity until I moved 300 miles south to go to college at 18, where authorship no longer seemed something liable to induce vengeful punishment.
David Knopfler
Authorship College Gravity Punishment
I took the process of doing as much myself as I could like a duck to water. I set up my own label and publishing, etc, and it was a fun learning curve two decades ago.
David Knopfler
Fun Learning Publishing Water 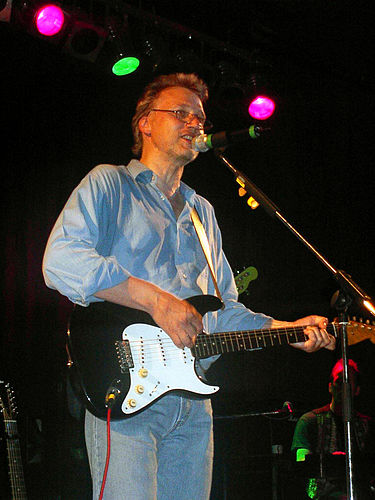 He is a co-founder of the rock band Dire Straits, with whom he spent three years. After quitting the band, Knopfler embarked upon a solo career as a recording artist. Knopfler initially created smaller record labels, publishing companies, and indie labels.

Knopfler has encouraged the advent of online purchasing music since 1995, although he concedes the necessity for other avenues of the distribution and sale of recorded music.His book Bluffers Guide to the Rock Music Business was published in 1996. His anthology of poetry "Bloodstones and Rhythmic Beasts" was published 2005.