If I were to say, “God, why me?” about the bad things, then I should have said, “God, why me?” about the good things that happened in my life.
Arthur Ashe
Life
Trust has to be earned, and should come only after the passage of time.
Arthur Ashe
Time Trust
I accepted the face that as much as I want to lead others, and love to be around other people, in some essential way, I am something of a loner.
Arthur Ashe
Love People Want
My potential is more than can be expressed within the bounds of my race or ethnic identity.
Arthur Ashe
Identity Potential Race
I have always drawn strength from being close to home.
Arthur Ashe
Being Home Strength
I have tried to keep on with my striving because this is the only hope I have of ever achieving anything worthwhile and lasting.
Arthur Ashe
Hope
I don’t want to be remembered for my tennis accomplishments.
Arthur Ashe
Accomplishments Tennis Want
When bright young minds can’t afford college, America pays the price.
Arthur Ashe
America College
You’ve got to get to the stage in life where going for it is more important than winning or losing.
Arthur Ashe
Life Losing Winning
There is a syndrome in sports called “paralysis by analysis.”
Arthur Ashe
Sports
From what we get, we can make a living; what we give, however, makes a life.
Arthur Ashe
Life Living
One important key to success is self-confidence. An important key to self-confidence is preparation.
Arthur Ashe
Key Preparation Self Success
I don’t care who you are, you’re going to choke in certain matches. You get to a point where your legs don’t move and you can’t take a deep breath. You start to hit the ball about a yard wide, instead of inches.
Arthur Ashe
Care Deep
Do not feel sorry for me if I am gone.
Arthur Ashe
Start where you are. Use what you have. Do what you can.
Arthur Ashe
Clothes and manners do not make the man; but when he is made, they greatly improve his appearance.
Arthur Ashe
Appearance Clothes Man Manners
The ideal attitude is to be physically loose and mentally tight.
Arthur Ashe
Attitude
True heroism is remarkably sober, very undramatic. It is not the urge to surpass all others at whatever cost, but the urge to serve others at whatever cost.
Arthur Ashe
Heroism
We must believe in the power of education. We must respect just laws. We must love ourselves, our old and or young, our women as well as our men.
Arthur Ashe
Education Laws Love Men Old Power Respect Women
I guess I started too early because I just thought it was something fun to do.
Arthur Ashe
Fun Thought
If you’re paid before you walk on the court, what’s the point in playing as if your life depended on it?
Arthur Ashe
Court Life
I may not be walking with you all the way, or even much of the way, as I walk with you now.
Arthur Ashe
May Now Walking
Let me put it this way: I think Republicans tend to keep the ball in play, Democrats go for broke.
Arthur Ashe
Democrats Play Republicans
Success is a journey, not a destination. The doing is often more important than the outcome.
Arthur Ashe
Journey Success
A wise person decides slowly but abides by these decisions.
Arthur Ashe
Decisions
We must reach out our hand in friendship and dignity both to those who would befriend us and those who would be our enemy.
Arthur Ashe
Dignity Enemy Friendship
I keep sailing on in this middle passage. I am sailing into the wind and the dark. But I am doing my best to keep my boat steady and my sails full.
Arthur Ashe
Wind
You learn about equality in history and civics, but you find out life is not really like that.
Arthur Ashe
Equality History Life
When we were together, I loved you deeply and you gave me so much happiness I can never repay you.
Arthur Ashe
Happiness
Later, I discovered there was a lot of work to being good in tennis.
Arthur Ashe
Being Tennis Work 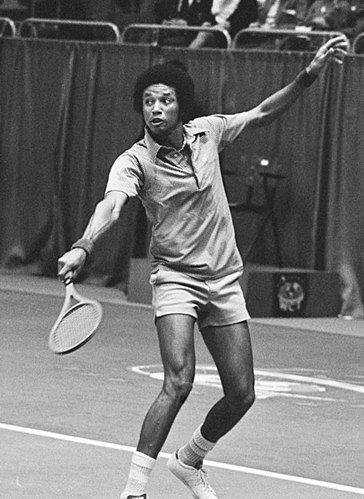 Ashe was the first black player selected to the United States Davis Cup team and the only black man ever to win the singles title at Wimbledon, the US Open, and the Australian Open. He retired in 1980. He was ranked World No. 1 by Harry Hopman in 1968 and by Lance Tingay of The Daily Telegraph and World Tennis Magazine in 1975. In the ATP computer rankings, he peaked at No. 2 in May 1976.In the early 1980s, Ashe is believed to have contracted HIV from a blood transfusion he received during heart bypass surgery. Ashe publicly announced his illness in April 1992 and began working to educate others about HIV and AIDS. He founded the Arthur Ashe Foundation for the Defeat of AIDS and the Arthur Ashe Institute for Urban Health before his death from AIDS-related pneumonia at age 49 on February 6, 1993.

On June 20, 1993, Ashe was posthumously awarded the Presidential Medal of Freedom by the United States President Bill Clinton.