I swear by that old expression, ‘One monkey don’t stop no show!’ The reality is, we still have some good men out there, and we should hail those men as the kings they are.
Angie Stone
Expression Kings Men Old Reality
As an artist, program directors always want to put you in a little box.
Angie Stone
Artist Want
They always come back when they learn that not every woman’s gonna treat them this good.
Angie Stone
Woman
Why do we need to wait until somebody sells 10 million records to give people a show like that? What about us smaller, hungry folk? At least gimme a curtain!
Angie Stone
Folk People
I would never disrespect any man, woman, chick or child out there. We’re all the same. What goes around comes around, and karma kicks us all in the butt in the end of the day.
Angie Stone
Day End Karma Man Woman
I have a new television show in the works, and that is all I can say right now.
Angie Stone
Now Right Television
I’m the type of woman you might say is too good. I’ll massage a man’s feet, have dinner cooked when he gets home. But once they leave, the door is closed, and the locks are changed.
Angie Stone
Feet Home Man Woman
I give and give, even when I get nothing back – and that sets me up for disappointment.
Angie Stone
Disappointment Nothing
Depending on which day, and how I am feeling on that day, I have a different favorite song on the album. One day it might be ‘Karma’, and other days it is ‘Stay For A While’
Angie Stone
Day Favorite Feeling Song
The college stations have a big voice, and I would like to become more involved with them. I would like to have symposiums with the members of various college radio stations.
Angie Stone
College Voice 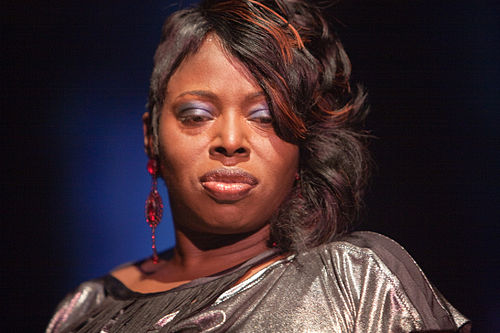 Angie Stone (born Angela Laverne Brown; December 18, 1961) is an American recording artist, producer, and actress. She rose to fame in the late 1970s as member of the hip hop trio The Sequence. Soon after, Stone began working with futuristic rap group Mantronix and singer Lenny Kravitz. In the early 1990s, she became a member of the R&B trio Vertical Hold.In 1999, Stone released her solo debut album Black Diamond on Arista Records, which was certified gold and spawned the R&B single “No More Rain (In This Cloud)”. After the transition to J Records, she released another gold selling album, 2001's Mahogany Soul, which included "Wish I Didn't Miss You", Stone's most successful single. She has since released five albums: Stone Love (2004), The Art of Love & War (2007), Unexpected (2010), Rich Girl (2012), and Dream (2015). Stone has appeared on television shows such as VH1’s Celebrity Fit Club and TV One's R&B Divas, and starred in movies such as The Fighting Temptations, Pastor Brown and School Gyrls.Stone has been nominated for three Grammy Awards. She has been most successful on the R&B charts, with four top 10 albums, including a number one, and 10 singles, including a top 10.