We go there with confidence, but we know there is a very fine line between success and failure in this game.
Alan Shearer
Confidence Failure Success
Football’s not just about scoring goals – it’s about winning.
Alan Shearer
Football Goals Winning
At times they don’t like you to kick them and they feel you’re not allowed to kick them.
Alan Shearer
One accusation you can’t throw at me is that I’ve always done my best.
Alan Shearer 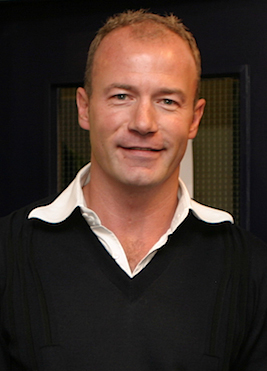 Alan Shearer, CBE, DL (born 13 August 1970) is an English retired footballer. He played as a striker in the top level of English league football for Southampton, Blackburn Rovers, Newcastle United and the England national team. He is Newcastle's and the Premier League's record goalscorer. He was named Football Writers' Association Player of the Year in 1994 and won the PFA Player of the Year award in 1995. In 1996, he was third in the FIFA World Player of the Year awards. In 2004 Shearer was named by Pelé in the FIFA 100 list of the world's greatest living players.Shearer scored 283 league goals in his career (all in the first tier of English football), including a record 260 in the Premier League (of which 58 were penalties) with a record 11 Premier League hat-tricks, and a total of 422 in all competitions including international at all levels. Until his retirement from international football in 2000, he appeared 63 times for his country and scored 30 goals. Shearer had a goals-to-game ratio of 0.667 throughout his career.

Since retiring as a player in 2006, Shearer has worked as a television pundit for the BBC. In 2009, he briefly left his BBC role to become Newcastle United's manager in the last eight games of their 2008–09 season, in an unsuccessful attempt to save them from relegation. Shearer is a Commander of the Order of the British Empire (CBE), a Deputy Lieutenant of Northumberland, a Freeman of Newcastle upon Tyne and an honorary Doctor of Civil Law of Northumbria and Newcastle Universities.