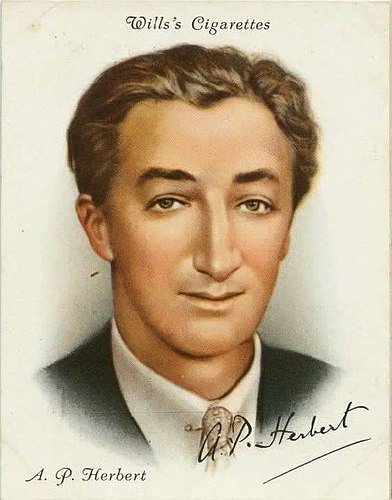 Sir Alan Patrick Herbert CH (24 September 1890 – 11 November 1971), usually known as A. P. Herbert or simply A. P. H., was an English humorist, novelist, playwright and law reform activist who served as an Independent Member of Parliament (MP) for Oxford University from the 1935 general election to the 1950 general election, when university constituencies were abolished.

Born in Ashtead, Surrey, Herbert attended Winchester College and New College, Oxford, graduating with a first in Jurisprudence in 1914. He joined the Royal Naval Volunteer Reserve as an ordinary seaman after the outbreak of World War I, later serving as an officer with the Royal Naval Division. He fought in the Gallipoli campaign and on the Western Front, becoming his battalion's adjutant in 1917, following which he was injured and did not return to the frontline before the end of the war. Following the war, he published The Secret Battle and joined the permanent staff of Punch in 1924. He also wrote the librettos for several musicals.

Herbert was elected as the Independent MP for Oxford University in the 1935 general election. Before the outbreak of World War II, Herbert campaigned for private member's rights, piloted the Matrimonial Causes Act 1937 through Parliament, opposed the Entertainments Duty and campaigned against the Oxford Group. He enlisted in the River Emergency Service in 1938 and served in World War II as a Petty Officer in the Royal Naval Auxiliary Patrol. He captained his river boat, the Water Gipsy, assigned to the River Thames. In 1943, he was part of a parliamentary commission sent to investigate the future of the Dominion of Newfoundland.