I’m no where as tough as my father. I really think that I am more open to change than he was.
A. J. Foyt
Change Father Open
I guess John Wayne would be one. I just respected the way he acted.
A. J. Foyt
My dad was very successful running midgets in Texas. Then, his two drivers ran into some bad luck. People started saying that Daddy had lost his touch. That it was the cars and not the drivers. I wanted to race just to prove all those people wrong.
A. J. Foyt
Dad Luck People Race Running Saying Successful Wrong 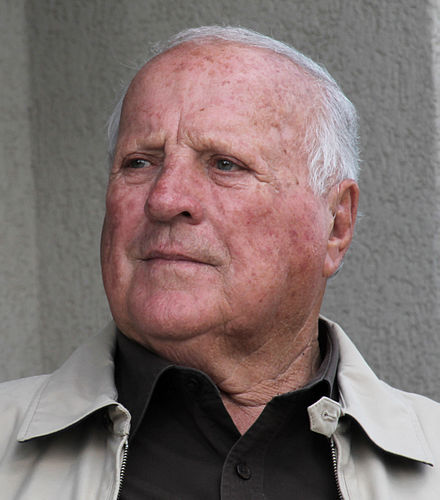 Anthony Joseph Foyt, Jr. (born January 16, 1935) is an American retired auto racing driver who has raced in numerous genres of motorsports. His open wheel racing includes United States Automobile Club Champ cars and midget cars. He raced stock cars in NASCAR and USAC. He won several major sports car racing events. He holds the USAC career wins record with 159 victories, and the American championship racing career wins record with 67.He is the only driver to win the Indianapolis 500 (which he won four times), the Daytona 500, the 24 Hours of Daytona, and the 24 Hours of Le Mans. Foyt won the International Race of Champions all-star racing series in 1976 and 1977. In the NASCAR stock car circuit, he won the 1964 Firecracker 400 and the 1972 Daytona 500. Foyt survived three major crashes that caused serious injuries, and narrowly escaped a fourth. Foyt's success has led to induction in numerous motorsports halls of fame.

Since his retirement from active racing, he has owned A. J. Foyt Enterprises, which has fielded teams in the CART, IRL, and NASCAR.